Back in January, we posted an article about plant response to far-red output. As stated, in the absence of far red radiation, such as when plants are raised under sole-source lighting (e.g. indoor growth chambers), leaves can be under-developed. Therefore, adding far red to the light spectrum can increase leaf size, enabling plants to capture more light and potentially increase their growth. 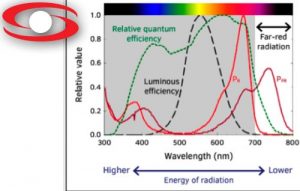 Far red radiation, typically described as energy between 700 and 800nm, is very influential on extension growth, meaning it influences the size of leaves and the length of stems. For some plant species, flowering is accelerated most when photoperiodic lighting includes both red and far red radiation. Therefore, lamps that emit red and far red are advised, especially when crops are grown under light-limited conditions.

The far red contribution varies significantly between different light sources. Measuring an assortment of light sources within our integrating sphere: