Lighting Science: What are µmol (Micro-Mols)? and how are they measured? 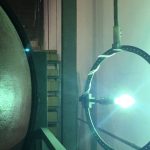 ‘Micromole’ is not an indicator of the spectral quality of a light source (relative amount of blue, green, red, etc. energy), rather it is a collective sum of energy (# of photons) within a band of wavelengths.

How are they measured?

Many companies measure and advertise the total micromoles emitted from a light source. Typical photometric spheres are capable of measuring energy between approximately 300nm and 800nm or even wider bands of wavelength, depending on the sophistication and cost of the sphere. As a result, advertised output of certain lamps (for example 2,200 µMol) in some cases may be misleading as this output rating may include wavelengths that are not useful to plant growth (e.g. 800 nm).

When selecting a light source, µMol output should be considered in tandem with the spectral profile and other design features such as life, lumen depreciation and optical efficiencies within reflector types.

Read more lighting science in our Plant Science and Lamp Science sections of this site!

2 thoughts on “Lighting Science: What are µmol (Micro-Mols)? and how are they measured?”